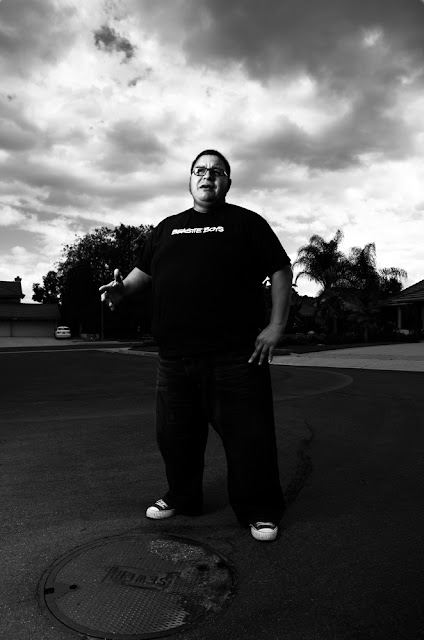 
During his high school days, armed with spray cans, said kid set about adorning
walls throughout the Greater Los Angeles area as GERM*ONE. But GERM*ONE
wasn’t content in focusing solely on can-conceived art and the urban
landscape, his head and heart craved a bigger picture.


Having taught himself computer graphics during late night stints at
Kinko’s, GERM*ONE took his plan to the next level. While working at a
local clothing store he crossed paths with the owner of Street Smart
Clothing, subsequently becoming the company's top graphic designer.
Having created an exceptionally well received (by the youth market)
range of T-shirt designs, GERM*ONE took the art-bull by the horns and
created his own hip hop clothing line – the ultra urban OG Top Nation Brand. It
was a move that garnered him major kudos from Los Angeles to Japan.


Still not contented to be pigeonholed, GERM*ONE took up screen printing
and entered the music arena, creating inaugural posters for
the Coachella Music Festival, and for such diverse acts as Boy George’s
Culture Club, Stan Ridgeway, and DJ Paul Oakenfold. But GERM’ wanted to
go bigger and get more personal with his art. So he started splitting
his time between working with and for such world famous designers as
Christian Audigier, Russell and Kimora Simmons and pursuing his own,
instantly recognizable style.


Somewhere along the way GERM*ONE became GERMIZM and he began developing
a signature collection of mixed media portraiture canvases that encompassed every art aspect
of his life thus far. Multi-layered, collage experimentation that blends the abstract with the figurative,
the works are so vibrant they are the embodiment of POP art.


In becoming a master of his own multi-faceted craft, and, courtesy of
his involvement in band merchandising and licensing, GERMIZM recently
re-lit his design relationship with Boy George. Together with Modern
Multiples legendary art maestro Richard Duardo, GERMIZM, and Boy George
created Punk Bette (an art remix) – the first in an ongoing series of limited edition screen prints.


From urban brick to gallery walls and all points in between, GERMIZM
continues to keep it real while maintaining an eye on ways to smash his
art further out of the box.